The Ontario Federation of Agriculture (OFA) is accepting applications for its 2019 student bursary program. OFA is offering three bursaries in the amount of $2,000 per recipient for students of OFA families across Ontario who are entering or currently pursuing a post-secondary education in an agriculture-related program. This is the fourth year that OFA will be awarding bursaries to OFA family members.

The bursaries funds were sourced from the silent auction at OFA’s 2018 Annual General Meeting. The bursaries will be awarded regionally, including one recipient from each region across the province. The regions include: South-Western Ontario, Central Ontario and Northern & Eastern Ontario.

Bursary recipients will be selected from applicants who are OFA members, a child of, or employee of an OFA member and are residents of Ontario.

Applicants should be able to demonstrate volunteer and industry related accomplishments, an interest in agriculture and rural issues, community involvement and satisfactory academic performance.

The bursary winners will be announced at OFA’s 2019 Annual General Meeting at the Hamilton Convention Centre in Hamilton, Ontario.

Please refer to the Bursary Terms and Conditions for additional information. 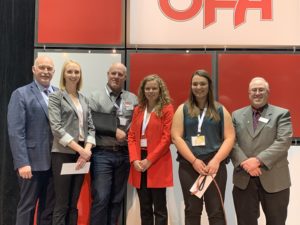 Lauren Benoit, Tamara Hamilton and Megan Wright all received a special education bursary from the Ontario Federation of Agriculture (OFA) yesterday at the organization’s annual meeting. The three Ontario university students will each receive $2,000 towards their continuing agricultural education.

Bursary funds were raised through a silent auction at OFA’s 2017 annual general meeting. This is the third year OFA has awarded the bursary to OFA family members, choosing these three from 37 entries.

Eligible applicants included students of OFA members families and from across the province who were entering or pursuing a post-secondary education in an agriculture-related program. The bursaries were awarded regionally, including one recipient from each region across Ontario (Northern, Eastern and South-Western). 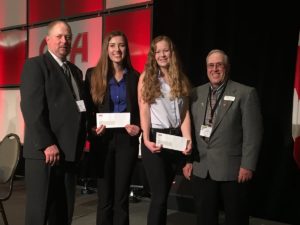 OFA’s bursary program began in 2016 to celebrate the organization’s 80th anniversary. The overwhelming success led to the continuation of the program.

For the second year, OFA awarded bursaries to three secondary school students pursuing education and a future career in agriculture at the organizations Annual General Meeting. OFA announced the winners of the 2017 student bursary award at OFA’s 2017 annual meeting – Julie French from Peel, Emily Potter of Temiskaming and Cassie Allen from Prescott. Each bursary winner was awarded $2,000.

The bursary award winners demonstrated exceptional volunteer and industry related accomplishments, a significant interest and involvement in the agricultural industry and rural community and maintained a high academic performance.

The bursaries funds were raised at the 2016 Annual General Meeting silent auction.

Eligible applicants included students of OFA families from across the province who were entering or pursuing a post-secondary education in an agriculture-related program. The bursaries were awarded regionally, including one recipient from each region across Ontario (Northern, Eastern and South-Western). 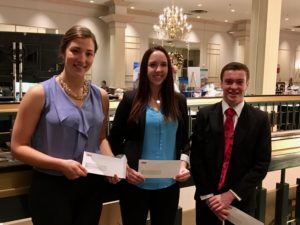 Winners were selected for their volunteer and agricultural industry related accomplishments, interest in agriculture and rural issues, community involvement and academic performance.

A fourth year University of Guelph student, Anita Rastapkevicius is completing her Bachelor’s Degree in Food, Agricultural and Resource Economics (FARE) with a minor in Agronomy. Anita was raised on a fruit, vegetable and cash crop operation in West Lorne, ON.

Cassidy Smith comes from a family farm in Berwick, ON and is in her second year of the Farm Management and Technology program at McGill University.

Logan Emiry is in his first year at University of Guelph in the Agriculture Science program and comes from a dairy farm in Massey, ON.

The bursary competition was open to students of OFA member families entering or currently pursuing a post-secondary education in an agricultural program. Winners were awarded regionally, with one winner from northern, eastern and southwestern Ontario.